This recipe was originally based on one by Kenneth Lo, which he says was adapted from the Chengtu Dining Rooms, Chengtu.

Chop the chicken thighs through the bone into two or three pieces. Leave the skin on.

Combine the sliced onion, shredded root ginger, salt, soy sauce and rice wine in a bowl. Add the chicken pieces and rub this marinade into the chicken. Leave in the fridge for at least 1 hour.

Prepare the sauce ingredients now: shred the red pepper and chilli (discard the seeds) and break the tangerine peel into small pieces.

Pour out your hot oil into a suitable container. Clean the wok in the sink and dry it in the usual way. Now make the sauce: heat 2T of oil in the wok. When hot, add the red pepper, chilli and tangerine peel. Stir-fry for one and a half minutes over a medium heat. Add the remaining ingredients and stir together for one minute.

Return the chicken pieces to the pan and mix with the sauce. Mix and turn for two minutes over a medium heat.

This recipe might in some ways be closer to the original than Kenneth Lo's version, since I've substituted Sichuan pepper and rice wine where he uses crushed peppercorns and sherry. On the other hand, my chicken pieces are larger — in his recipe they are "bite sized" and I'm sure that's more authentic.
Posted by Stuart Wray at 11:29 1 comment: 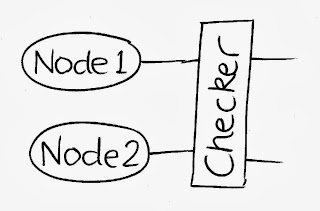 In practice, as noted by Gilbert, Lynch and Brewer in the papers I mentioned earlier, in real systems we never trade off all of consistency, availability or partition tolerance. In practice, we compromise a little on one to gain a little more of another, and we make different compromises at different times or for different purposes. But if you see a system which appears to be getting more than its fair share of both consistency and availability, look a little closer: it must be based on low level resilience using the sort of techniques I've described here.
Posted by Stuart Wray at 10:33 3 comments: